To say David O’Coimin is excited about the NOOK is an understatement, though it doesn’t come as a surprise since he is the designer, inventor and “parent” of the product that makes working in the open plan a lot more enjoyable.

Like all great products, the NOOK was born out of necessity and need. O’Coimin was frustrated (and inspired) by what was hap­pening as companies shifted to the open office. Yes, these open spaces foster collabo­ration, but at what cost? 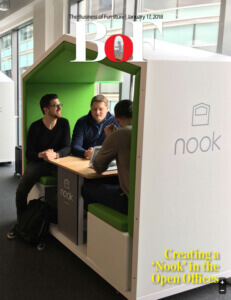 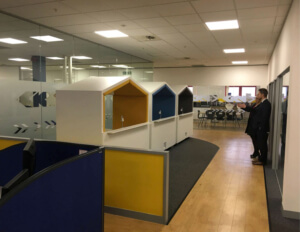 “I feel the open office is a hindrance to natural productivity,” he says. “Yet I was in­spired by the Googles and the Facebooks of the world who seemed to be able to connect with the human spirit and (connectivity) aspects of the working environment.”

He watched with interest as telephone booth-ish products began hitting the mar­ket. They solve privacy problems inherent with open plan, but O’Coimin believes they kill the collaboration everyone was seek­ing in the first place. They also tend to be expensive and limiting because of fire and other building codes. “What I found is that one size does not fit everyone all the time, and I felt I could do something about it and turn the idea I had into reality,” he says.

O’Coimin is a product designer who worked at an Amsterdam consultancy for a decade. He sold the large company in 2011 and went from the CEO to one of 140,000 employees. All the while, he was dreaming of a product that would make collaboration and privacy come together.

In 2015, he put pen to paper and turned the initial idea into some technical draw­ings. He got rid of his own sofa and dining table and put the first NOOK prototype into his own home. O’Coimin invited friends, fellow designers and anyone else who cared to see it in his house and asked them to be brutally honest and critical.

“They gave me great inspiration,” he says, “and it was clear that everybody who got into it felt ‘it.’ They said, ‘Yeah, there is something good about this shape.’ It is hom­ey, intimate and enclosed without creating a feeling of isolation or detachment.

“I knew I could create another telephone box, but I felt there was something not quite right about it. NOOK gives you a sense of pri­vacy without disconnecting with everyone around you.” 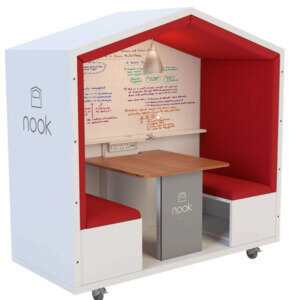 NOOK was born. It is not a phone booth product, but not a meeting room either, though it shares some of the DNA and ben­efits of both. Instead it is more like a cov­ered, mobile picnic table for work — a place where small teams can meet, an individual can find some privacy or someone can re­lax and have lunch or read a book. It is a product that works perfectly well to foster the collaboration everyone is after, but also works equally as well as an oasis for that little bit of privacy an equal number desire.

O’Coimin is based in Bristol in the U.K., and he made some prototypes that were in­stalled in a local coworking center. He asked tenants what they thought and studied how they used the NOOKs. It became instantly clear, he says, that the NOOK could become a viable and important office product. 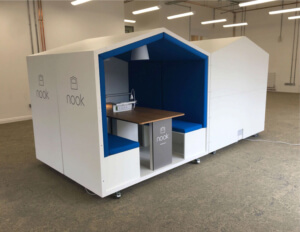 He quit his day job in 2016 and began working on NOOK full time, building the first 10 units for a web summit in Portugal. There, he found NOOK could be used in ap­plications beyond the office. O’Coimin left the event with 50-60 requests from event organizers who wanted to rent NOOKs for events. At a trade show, for example, the organizers wanted to use them as spots where attendees or exhibitors could take a break, answer a phone call or meet with a customer.

NOOK was then split into two divisions. One rents or leases NOOKs, and the other sells directly to customers where they go into corporate offices, coworking centers, science parks and universities. Customers already include Facebook, BP, Virgin and Adidas. And there is a fleet of NOOKs avail­able to rent around the world.

The NOOK is mobile, so it can be moved and used to define a space or linked togeth­er with other NOOKs. It also is extremely easy to set up. O’Coimin says someone with no experience can take a NOOK apart in 20 minutes and set it up in about 40. “It is de­signed to be ‘IKEAesk’, but even easier than that,” he says. “It is designed to fit through most standard doorways, so often it doesn’t even need to be broken down to move. We move them fully built all the time.”

Some customers even use them in the of­fice and then bring the NOOK with them to trade shows and other events. “We made NOOK mobile for a couple of reasons,” he says. “The most modern workspaces have agility at their core. These companies are having breakfast together in their NOOK, working hard to get inboxes clear, writ­ing reports, lunching together or having meetings. You want to be able to change that space around pretty easily. It is easy to unlock a NOOK’s casters and gather multiple NOOKs together to huddle. If that is difficult to do, you won’t do it. If it is easy, when you move offices, you are more likely to take it with you.”

A core philosophy at NOOK is to be afford­able for anyone — for any size organization. That’s why its customers range from ma­jor international corporations to startups. NOOK is cost effective because it is agile as well — a product that can be changed, added to or refreshed from the moment it is purchased. It also is highly customizable. Customers can choose from myriad uphol­stery options, laminates, whiteboards, light fittings, USB plugs and electronics. It costs $5,600. 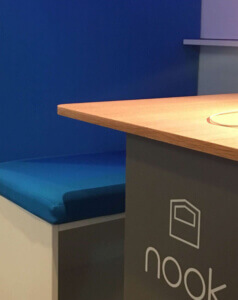 While NOOK has made a splash in the U.K. and Europe, it is just making its way to the U.S. market. Universal Exports is the exclu­sive distributor in the U.S. market, which is looking for distribution partners here. Sales were difficult in the early part of 2017, O’Coimin says, but got “hot” in the last quarter. The products are being made in Bristol, but O’Coimin hopes to find a part­ner in the U.S. to take over upholstery and perhaps make the entire product here if it makes sense.

“The first nine months in business we were just grinding and showing NOOK off,” he says. “Then it just started to tick. We fin­ished the year 125 percent above target and going into 2018, we are expecting to do five times what we did in 2017, conservatively.

“There is just so much call for this type of product across spaces and across geog­raphies. People are waking up to the im­portance of their workforce. We’ve seen so much of that in the last 10 years — this focus on workplace well-being. When you think about the open office and a fixed meeting room, this is the point in between where in­novation is happening.”